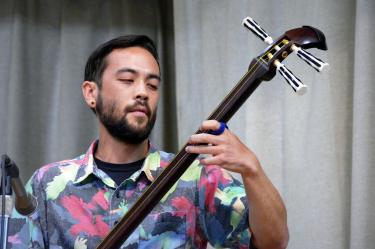 Patrick Oiye is a versatile artist specializing in the Tsugaru shamisen (a Japanese banjo-like lute) and taiko.  He has studied shamisen with Hiroshi Nitta, founder of the celebrated Nitta Ryu Tsugaru Shamisen School in Sapporo, Japan and taiko with master artist Kenny Endo in Honolulu.  He has recorded shamisen for commercials and collaborated with professional dancers, actors and musicians of various talents such as shakuhachi (bamboo flute), percussion, and accordion.  Patrick has been in productions at the University of Hawaii playing guitar, taiko and dancing and has provided a live score of shamisen, taiko and shinobue (bamboo flute) for thousands of children at the Honolulu Theater for Youth.  Patrick has been a Taiko Center of the Pacific Performing Ensemble member since 2012.

It’s time to pick up a new kind of bachi and rock out to the Tsugaru shamisen!  Patrick Oiye is an engaging performing member of the Taiko Center of the Pacific (TCP) and hails from Seattle, WA.  Before his start with TCP in 2012, Patrick began playing the guitar in 2000, and helped form a post rock band called Smooth Sailings and toured across the west coast.  During this time, Patrick first saw shamisen while in Seattle in 2010, and was under the impression that the instrument was inaccessible in the US and was only available in Japan.  However with $1000 and many skipped meals, Patrick bought himself a shamisen while in Tokyo.
Tsugaru shamisen workshops and lessons are rare across the USA, so Patrick learned to excel by serving as his own teacher.  He was later formally instructed in 2015 by Hiroshi and Masahiro Nitta in Sapporo, Japan.  Some of Patrick’s notable shamisen works include his debut performance at Shasta Yama in 2014, contributing to an original composition by Nobuko Miyamoto and Derek Nakamoto entitled “Senbazuru” for obon celebrations in California, commercial recordings, playing seasonally for the Hawaii Theater for the Youth, and performing with the Kenny Endo Taiko Ensemble.
Patrick expressed that the Tsugaru shamisen is an incredibly expressive instrument through its percussive elements and has an immense amount of methods to produce intricate details in music.  “There are a lot of correlations between Tsugaru shamisen and the blues,” Patrick explains.  “It’s not just about listening to the notes or the rhythms, rather the nuances of scratchy and poppy textures expresses the spirit of the shamisen and the generations of its performers and teachers.”  If you want this rare opportunity to discover if the expressive Tsugaru shamisen is for you, then try out this versatile instrument with Patrick!